The journey from Counting Money and Preparing Loans to Entrepreneurial Storytelling

I graduated with a Bachelor’s of Economics degree from the Monterrey Institute of Technology and Higher Education, Mexico City Campus in December 2010. After crossing the proverbial stage, I went back to Grenada and worked at the Grenada Public Service Co-operative Credit Union, now known as the Ariza Credit Union, as the officer in charge of the Grenville Branch. After 3 years, I resigned from my position and moved to Toronto Canada.

I soon realized that jobs were hard to find in Toronto. The main reasons for my difficulties were my lack of Canadian working experience and no Canadian education. Eventually, I found a job as a Claims Processing Agent in an insurance company. Because I am fluent in English and Spanish, after three months, I was promoted to the bilingual help desk to deal with all the grumpy, angry clients. During that time, I was also freelancing in the digital media world, working with clients on Facebook advertising and social media management. I then started looking at the prospect of obtaining my master’s degree to give me the extra push as an up-and-coming entrepreneur. I remember seeing the Master of Digital Media programme at Ryerson University; however, I took a while to apply. Admittedly, I initially had reservations about applying because possessing technical and creative skills appeared huge parts of the consideration for applicants and many of the past students professed about having the requisite skills.

Although I had a knack for doing business, I was technologically limited, so I must admit that I had some self-doubt. Additionally, my shortcomings were obvious because I can’t code nor use photoshop, so I thought I would not have gotten in. However, after investigating some more and speaking to some more people, I decided to apply in 2016, which I later did. To make a long story short, I got in, and I am currently pursuing the degree. Admittedly, I entered the programme thinking I would have been working on building my digital agency as a Facebook advertiser and Social Media Manager. However, after starting the programme, I instantly fell in love with transmedia storytelling. Even though I am still into social media and different digital technologies, I am now viewing those areas from a storytelling angle.

I fell in love with transmedia storytelling because I realized that many of the successful business personalities and entrepreneurs like Gary Vaynerchuk were not just experts in social media. Instead, they were storytelling on these platforms based on the context best suited for the particular platform. Additionally, from observation, it became quite clear to me that not many people understood the importance of storytelling in business, so I am willingly taking the onus on myself to spread the word.

Stories are the currencies of our conversations. If you want to persuade persons to do or buy something, the best approach would be to appeal to their emotions by telling a story. I was listening to an interview with Dave Kerpen from Likable Local, and one of the things he said was that a good story could be tested using one simple question, ”Is it shareable?”. For that reason, I have been looking closely at why stories spread. Admittedly, I do not have all the answers here; however, I will be documenting, testing, and sharing my findings in due time.

I wish to also mention, however, that one of the findings that was interesting to me was that there are what we call activation emotions which cause persons to take action such as sharing a story. Examples of these emotions are happiness and anger while sadness for instance is a deactivation emotion which leads to little or no shareability.

To end this piece, I would also say it was enlightening to find out that one of the secrets to telling stories online is to understand the context of the platforms where you are storytelling. For instance, it is unlikely to find the same videos from Buzzfeed on Facebook as you will find on Youtube. Therefore, it is important to understand people’s state of mind when they are on different platforms and share stories with them based on why they’re there. I also found that there were different types of stories namely timely, seasonal, and evergreen stories. However, I will sign off here for now and delve deeper in a subsequent post. 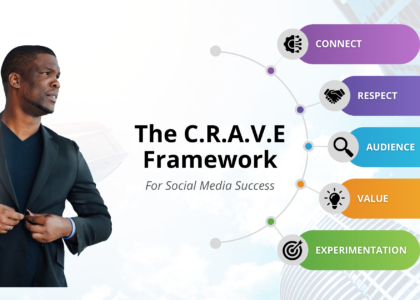 Using The C.R.A.V.E. Framework to Accelerate Your Success on Social Media